This custom fixed blade skinning knife is featured on the cover of Blade Magazine – May 2017 issue! I am so excited to have been given this opportunity and it is a personal milestone and a huge honor!
(More pictures below) 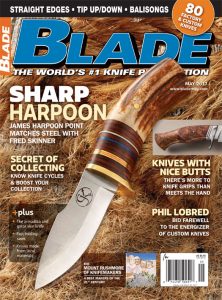 This custom fixed blade skinning knife, my harpoon point skinner, was submitted in December 2016 to Kim Breed (field editor for Blade Magazine) for testing. Back in November 2016, I was contacted by Kim Breed and was asked if I would be interested in submitting a knife to him for testing. Kim is one of the editors for Blade Magazine and is the author of the “Spec Sheet” article found in most every issue. 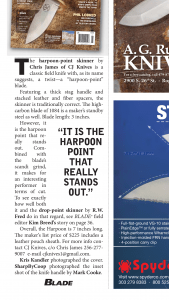 For each “Spec Sheet” article, numerous makers are asked to submit knives of a similar style and/or purpose. For instance, fixed blade knives suitable for skinning. When Kim receives every knife that was submitted to him, he puts them through a rigorous battery of tough tests. He puts them through everything from cutting and batoning wood, to cutting sisal rope, to cutting leather, to whittling wood, to flexing the edge against brass rod to make sure the edge can withstand flexing without chipping. When all of the knives have been put through all the tests, he chooses the best two knives from all of the ones submitted to be featured in his article.

The particular style knife he was looking for was a knife suitable for skinning and no more than 7″ in overall length. 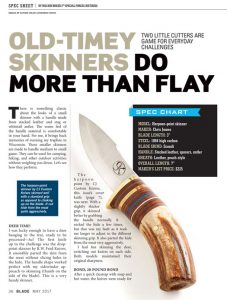 This custom fixed blade skinning knife – my HPS (harpoon point skinner) was the knife I sent him.

A harpoon point knife has a spear shaped blade with a “ramp” on the spine that runs from the handle forward. This ramp gives you a place to put your finger or thumb and provide better control when cutting. 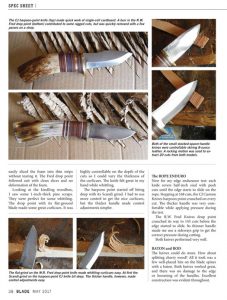 In January 2017 I was informed that my knife made the cut (pun intended!) as one of the two best custom knives he received and that my knife would be featured in the May 2017 issue.
I had only been making knives for less than a year when I submitted the knife, so needless to say, I was very excited and felt very honored to be found worthy to be featured in the article.
Imagine my surprise when, in February, I was informed that not only was my fixed blade knife going to be featured in the magazine article, but was going to be featured on the cover of Blade Magazine!!! I feel very blessed, honored and humbled to have been given this opportunity. Many thanks to Kim Breed and Blade Magazine.

I’ve made some great friends in the knife making community since I started making knives. Some of them are some of the know some of the best custom knife makers around. One of those custom knife makers is featured opposite of my knife in the article. What makes this even better is that he has also become a very close friend and has been my personal mentor. Thank you, Reed (R.W.Fred knives), for all of your help and encouragement and most of all, your friendship.

While this exact knife is not for sale, I have had some orders for the same knife (as close as possible when working with natural materials) and I’ll be happy to make you one too! Please contact me here to order. 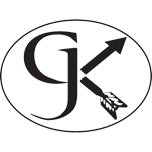